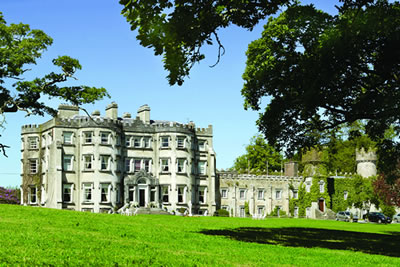 The newly-featured properties include Ballyseede Castle near Tralee in County Kerry. One of Ireland’s earliest surviving castles, Ballyseede was the seat of the Fitzgeralds, Earls of Desmond, right up until the 1960s.

Transformed over many generations from defensive stronghold to gracious country house, today there are 23 individual bedrooms, a breakfast room, a two AA rosette restaurant (booking essential) and the welcoming Pappy’s Bar which offers meals throughout the day.

A three-night break at Ballyseede Castle starts at £293 per person this year, based on sharing a double room, including breakfast each morning and return ferry crossings for a car and two adults.

In County Galway, Ballynahinch Castle Hotel & Estate is set beside the Owenmore River in Connemara. The pirate Queen Grace O’Malley was entangled its 16th century family history, but the building today reflects the elegance of the early 19th century.

Perhaps its most famous owner was the celebrity Indian cricketer Prince Ranji, who used Ballynahinch as a holiday home in the 1920s, attracted by its beautiful setting and country pursuits, from salmon fishing to shooting.

As a country house hotel it has welcomed the great and good from across the globe. It now offers 48 rooms, half in the house itself, the others in modern wings in keeping with the country-house style.

Three nights here, including breakfast each morning and return ferry crossings, costs from £380 per person when two adults travel together and share a room.