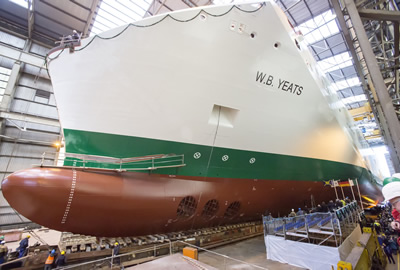 The completed hull of the new Irish Ferries cruise ferry W. B. Yeats – ceremonially named by Ms. Rikki Rothwell – was launched into the water earlier today(12.00hrs, Friday, 19th January, 2018) at the shipyard of Flensburger Schiffbau–Gesellschaft in Flensburg, Germany where the vessel is being built.

Fully painted in familiar Irish Ferries lettering and colours, and bearing the name W. B. Yeats along its bow and stern sections – the name having been chosen after drawing strong support from the public in an online competition that attracted nearly 100,000 entries – the vessel entered the water stern first. There to attend the event, alongside shipyard workers and officials, were representatives of the company led by Irish Continental Group Plc chairman John McGuckian, chief executive, Eamonn Rothwell, CFO, David Ledwidge, and Irish Ferries managing director, Andrew Sheen.

The €150 million, 54,985 gross tonnes cruise ferry will arrive into Dublin next July when it will enter year-round service on Ireland – France and Dublin – Holyhead routes. In the intervening months, remaining construction work on the hull will be completed and the vessel fitted out with all of the technical, operational, décor, furnishings and passenger amenities required onboard. Later, before scheduled services can commence, it will undergo sea trials, crew training and docking procedures at the Irish, UK and French ports into which it will operate.

Set to be the largest and most luxurious ferry ever to sail on the Irish Sea, the W. B. Yeats will have space for 1,885 passengers and crew, 435 cabins including luxury suites with their own private balconies, and almost 3km of car deck space.

In a comment, Mr. Sheen said: “the launch of our new cruise ferry W. B. Yeats – and the expectation of our second new cruise ferry yet to come – herald in a new era in ferry travel between Ireland, UK and Continental Europe bringing with it new standards in terms of passenger and freight capacity, comfort and reliability beyond anything previously envisaged”.

Second Vessel
In addition, the Flensburg shipyard in which the vessel is being built will shortly commence building a second, even larger cruise ferry for delivery in 2020 which was commissioned only weeks ago by Irish Ferries parent, Irish Continental Group plc at a contract price of €165.2 million.

Intended for service on the Dublin – Holyhead route, this second new vessel will be the largest cruise ferry in the world in terms of vehicle capacity with accommodation for 1,800 passengers and crew. Its vehicle decks will have 5,610 freight lane metres, providing the capability to carry 330 freight units per sailing – a 50% increase in peak freight capacity compared to the current vessel Ulysses.

Images in this article (high res)