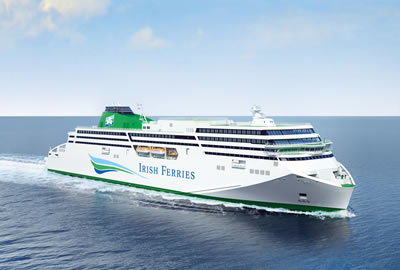 Irish Ferries today expressed its disappointment with the issuing of notices by the National Transport Authority (NTA) in respect of the cancellations that arose following the delayed arrival of the new W.B. Yeats ship.

These cancellations were due to extraordinary circumstances which were completely outside of the company’s control.  Since the delay was due to unforeseen delays by the shipbuilder FSG, and was notified to passengers months ahead of planned sailings, Irish Ferries does not agree that the company infringed the relevant EU Regulation.  In dealing with its customers Irish Ferries believes it took every reasonable action to provide passengers with alternative travel options, from a no-quibble immediate refund to allow them to make alternative travel plans, as well as alternative sailings on the Oscar Wilde out of Rosslare Europort and Land bridge alternatives via the UK.

Irish Ferries would like to state again that it sincerely regrets the disruption to its passengers and once again conveys its apologies to all of those who were affected last year. A goodwill gesture of €150 discount for a sailing to France this year has already been provided to all customers impacted by the cancellations.

Ongoing discussions with the NTA on the interpretation of EU regulation has been a critical factor in regretfully concluding that we are unlikely to operate the Oscar Wilde to France out of Rosslare in 2019 – a service which has been in operation continuously for 45 years, providing the South East of the country with an important tourism and freight link directly to the European market.  The NTA’s approach to the Regulation has contributed to making the route commercially unviable into the future.  Furthermore, the NTA interpretation of the EU Regulation specifically regarding land bridge (i.e. travel between Ireland to France through Britain), significantly penalises regional ports due to their lower frequency of back up ferry services from Ireland to the UK in the event of a cancellation of a direct Continental service.

Irish Ferries has, on numerous occasions, attempted to engage with the NTA by offering to enter into a mediation process without any preconditions. The NTA have not taken up this offer.  Irish Ferries will appeal the NTA’s decision in the courts (including, if needed, the European Court of Justice).

Irish Ferries firmly believe that consumer protection should be reasonable, proportionate and in full compliance with the law.  We also believe it is essential to protect the viability of direct links to the Continent which is now all the more critical against the backdrop of Brexit.