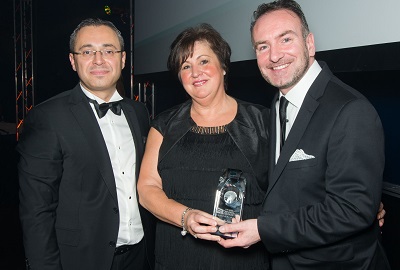 Irish Ferries has joined the winners’ enclosure once again, having been voted Ireland’s ‘Best Ferry Company 2017’ for the 7th year in succession at the recent Irish Travel Industry Awards.

Their latest success brings to three, the number of ‘Best Ferry Company’ titles currently held by the company, having also been awarded the top honour at the recent 2016 Irish Travel Trade News Awards and 2016 Travel Media Awards.

An initiative of the Irish Travel Agents Association, the award was presented to Irish Ferries on foot of votes cast by Irish travel agents and suppliers at a gala banquet hosted by RTE’s Miriam O’Callaghan in the Mansion House, Dublin.

Accepting the award, Irish Ferries head of passenger sales Dermot Merrigan thanked travel agents for their support, adding: ‘Irish Ferries is incredibly honoured that our efforts to provide the highest possible level of service continue to be recognised and, once again, we look forward to working closely with our travel agents in 2017.'