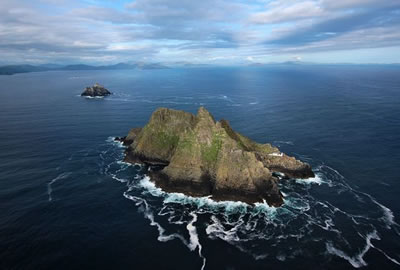 Skellig Michael is the real star in new Star Wars film: see for yourself

Some of the most intense scenes from the new Star Wars film (opens 14 December) owe nothing to green-screen technology and everything to the real green of Ireland and the extraordinary UNESCO World Heritage Site of Skellig Michael, an island off the Kerry coast.

Actors Mark Hamill, Daisy Ridley, John Boyega and Oscar Isaac – plus director Rian Johnson and crew – were challenged first to reach the island, then to climb more than 600 steps to the remains of the sixth century monastery that stood in for Luke Skywalker’s hideaway. 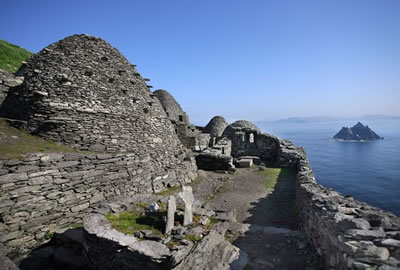 Landing on Skelling Michael is tightly controlled, because as well as being a heritage site it is a haven for puffins and other seabirds in breeding season, but several boat operators run trips out of Portmagee and Derrynane from mid-May to October.

Advance booking for this weather-dependent thrill are strongly recommended, but with so much to do and see in County Kerry, it makes sense to have a local base such as Irish Ferries Holidays’ featured cottages in Waterville.

The smart holiday homes are only 750 yards from the shore in this colourful village. Each offers open-plan living and four bedrooms for flexibility (plus three bath/shower rooms).

Irish Ferries offers a seven-night holiday for a family of two adults and three children under 16 for only £1088 in August 2018. This includes cottage rental and return Irish Ferries crossings for the family and car from either Holyhead to Dublin, or from Pembroke to Rosslare.

Boat trips to land on Skellig Michael cost from approximately €75 per person.
Like the film (classification 12A), age restrictions apply to boat trips: typically eight, ten or 12 years, depending on the operator, check before booking.
Landing on Skellig Michael is not possible for those with mobility issues, but trips around the islands may be (from approx €35).